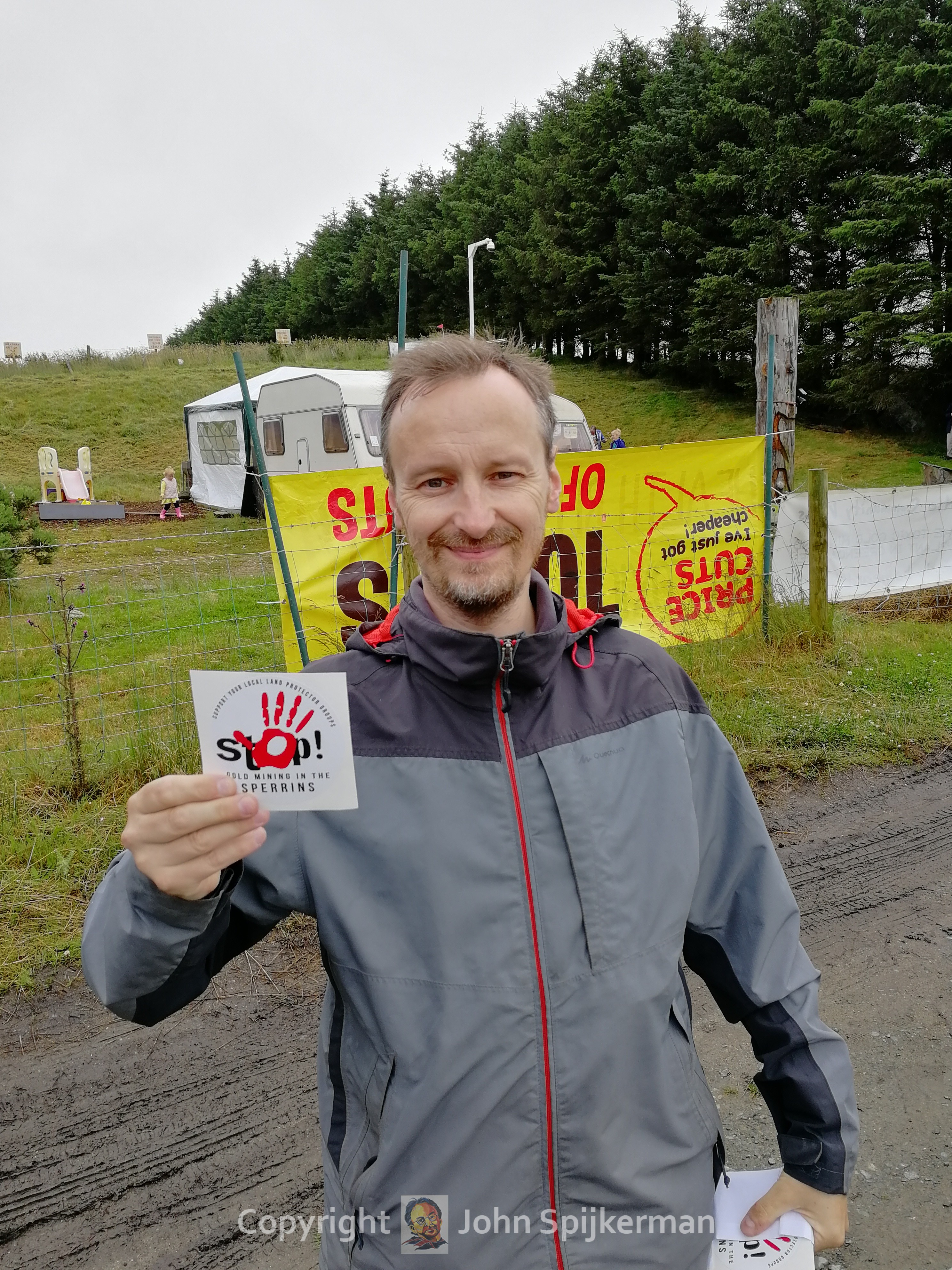 OMAGH/GREENCASTLE – Gordon Dunn is a paraglider from Omagh. He enjoys flying over the Sperrin Mountains. ,,I have been flying for fourteen years. I know every river, every hill. The landscape changes all the time. I see the changing seasons.’’ From the ground the views in The Sperrins are already spectacular, but from up above everything gets a different dimension. The world seems endless. Paragliding, Dunn follows the play of sun and shade over the hills of the Sperrin Mountains. From afar he can see the incoming showers. One day, a year ago, he flew over the area and saw drilling going on near a waterreservoir that provides 50.000 people in and around Omagh with their drinking water. From the air the drilling positions could clearly be seen. Dunn did some research and found out that Canadian mining company Dalradian was doing drilling in the area. By drilling deep holes into the ground, the mining company wants to find out where precious metals such as gold and silver are located.

I meet Gordon Dunn on wednesday 17th July at the protest camp in Greencastle. It is a rainy day, but despite the rain and the fierce winds that blow, the Sperrrin Mountains still look outstandlingly beautiful. Dunn is here today to give his support to the protesters at Greencastle. The Fermanagh & Omagh District Council has issued an eviction order that two ‘unauthorized caravans’ on a former parking place near the proposed goldmine in Greencastle, should be ‘permanently removed’ before 17th July. If not, a fine and forced eviction threaten. But the protesters at Greencastle have no intention of leaving. Today they have organised a party at the protest camp to show the council their defiance: they will never give in.

Dunn tells me of his engagement in the struggle against mining in the Sperrin Mountains. From a neighbour close to the waterreservoir he heard that Dalradian had been busy in Greencastle since 2016. ,,Apparently the council gave them permission to do the drillings. When a year ago I saw these drilling positions near the reservoir, I was alarmed. What are they doing?’’ Dunn started the anti mining group CAMIO (Cooperate Against Mining In Omagh) trying to stop this development. ,,We have twenty core members in our group. We have over a thousand people following us on Facebook. We have done a lot of public meetings. People didn’t know these drillings were going on. There’s a lot of anger in the town because one of the drilling locations is only about 180 meters away from the reservoir. At the end of the day they’re drilling into water channels under the ground.’’ Dunn fears that the drilling might lead to led and other heavy metals ending up in the drinking water. ,,There’s no facility for removing heavy metals out of this reservoir.’’

Paraglider Gordon Dunn has a powerful weapon: his aerial pictures. He always takes his camera while flying. He has made the most beautiful photographs of the Sperrin Mountains. Because the air knows no boundaries, he flew over many places where people would normally not come. Such as the exploration site that Dalradian set up in Rouskey, not far away from Greencastle. ,,Dalradian, they really don’t like me’’, Dunn smiles. ,,I take lots of aerial pictures. They can’t hide from me.’’ His aerial pictures clearly show what is happening on the ground. It alarms people to the risks of mining for the surrounding area.

Dunn also made aerial pictures of the somewhat smaller Galantas goldmine in Cavanacaw, near Omagh. That open-pit mine started in the nineties. ,,There were protests agains it, but you didn’t have social media then. I heard about this mine in Cavanacaw, but because they didn’t use cyanide I wasn’t too worried’’, Dunn explains. When he flies over the Gallantas goldmine at Cavanacaw, Gordon Dunn sees the destruction of the landscape. And Cavanacaw is so much smaller than the mine proposed in Greencastle and it doesn’t have a processing plant on site where cyanide is being used to extract the gold.

Dunn fears that the goldmine in Greencastle will only be the beginning of a much wider development and many more goldmines in the Sperrin Mountains. He foresees a domino effect. ,,There is a planning application for Greencastle but there are actually a lot of hot spots that Dalradian want to focus on as well. One of these hotspots will be very close to Omagh. Our fear is that if they build a mine here. Greencastle will be their first mine. Patrick Anderson, the CEO of Dalradian, has said there will be a mine camp. There’s a rumour there will be seven mines. If they get their permission here at Greencastle in ten years time there will be mines everywhere. It will be like Klondike in South Africa.’’ Dunn has no high esteem of the ethics and morality of mining companies. ,,These companies will do whatever they need to do. Making money is their only motivation. They will do whatever they can to get the gold out of the ground as cheaply as possible. They don’t care about local people, they don’t care about the environment.’’

CAMIO has made a lot of people in Omagh aware of the plans for a goldmine and processing plant in Greencastle, Gordon Dunn claims. ,,A lot of Omagh people are actively fighting that now. We are gathering signatures against the planning application. Our primary objective is to stop the development at Greencastle. They probably did Greencastle first, because it’s a less densely populated area. If they would have tried in Omagh they would never have gotten permission’’ On a government level no formal decision on Dalradian’s application has been made. For more than two years there has been no government in Northern Ireland and since a ministerial decision needs to be made on the application, it is not likely that a decision will be made soon. Dunn thinks that by stopping Dalradian in Greencastle, the other mining developments in the area will also be put on hold.

There are also anti-mining groups being set up elsewhere in the region. CAMIO has good contacts with all of them, as with anti-mining groups in the Republic, where there also many plans for mining. It’s the same in Northern Ireland and the Republic, Dunn observes. ,,The government is trying to sell the land from the people from under their feet and the people are angry with the government.’’

The advertorials Dalradian publishes in the local newspapers, the Ulster Herald and The Tyrone Constitution – almost on a weekly basis – are a great nuisance to CAMIO. In the advertorials the mining company only emphasizes the benefits gold mining will supposedly bring to the local economy. ,,But they are not looking at the net jobs’’, reiterates Dunn. ,,Certainly you will gain some jobs here, but what is going to happen to tourism, what is going to happen to agriculture? It is our estimation that the net difference wil be actually jobs negative.’’ Dunn has asked the local newspapers to look at their own responsibility and stop publishing the one-sided Dalradian sponsored advertorials. ,,They have published a few claims that are not right. We have contacted the editors and said ‘Look this is immoral’. But they say ‘We have to do this, because we are being paid. We have to do this or we will be taken to court’. They can’t refuse sponsored content.’’ But despite all the PR in Dalradians advertorials, the mood under the population has changed, Dunn observes.

Gordon Dunn has lost his confidence in the major political parties in Northern Ireland. ,,I have no allegiance to any political party, but they have betrayed us. The political situation here is a farce.’’ For years there has been no government in Stormont. The MLA’s in Stormont are not sitting there, but they are being paid. That’s a complete joke. We’re the laughing stock of Europe. We should have a real election to vote in a government that will works for us. And the people who are not working at the moment, should be barred from reelection.’’

Although he has distrust of many politicians, he is trying to get CAMIO’s point of view through to them. ,,We have been lobbying MP’s and local councillors about the situation and trying to get them on our side. Some of the politicians in Omagh, especially the unionist politicians, are pro-mining. They say ‘It’s jobs’. But they are not looking at the net jobs. Certainly you will gain some jobs here, but what is going to happen to tourism, what is going to happen to agriculture? It is our estimation that the net difference wil be actually jobs negative.’’

Local politicians from the Democratic Unionist Party (DUP) have said to Dunn that their leader, Arlene Foster, has more or less told them to adopt their line. ,,So, they do what their leader tells them. I say to the local guys ‘You have your own voice, your own children. This affects you.’’

And what is their reaction?
,,It irritates them if I come to them with this angle. They don’t want to hear the truth.’’