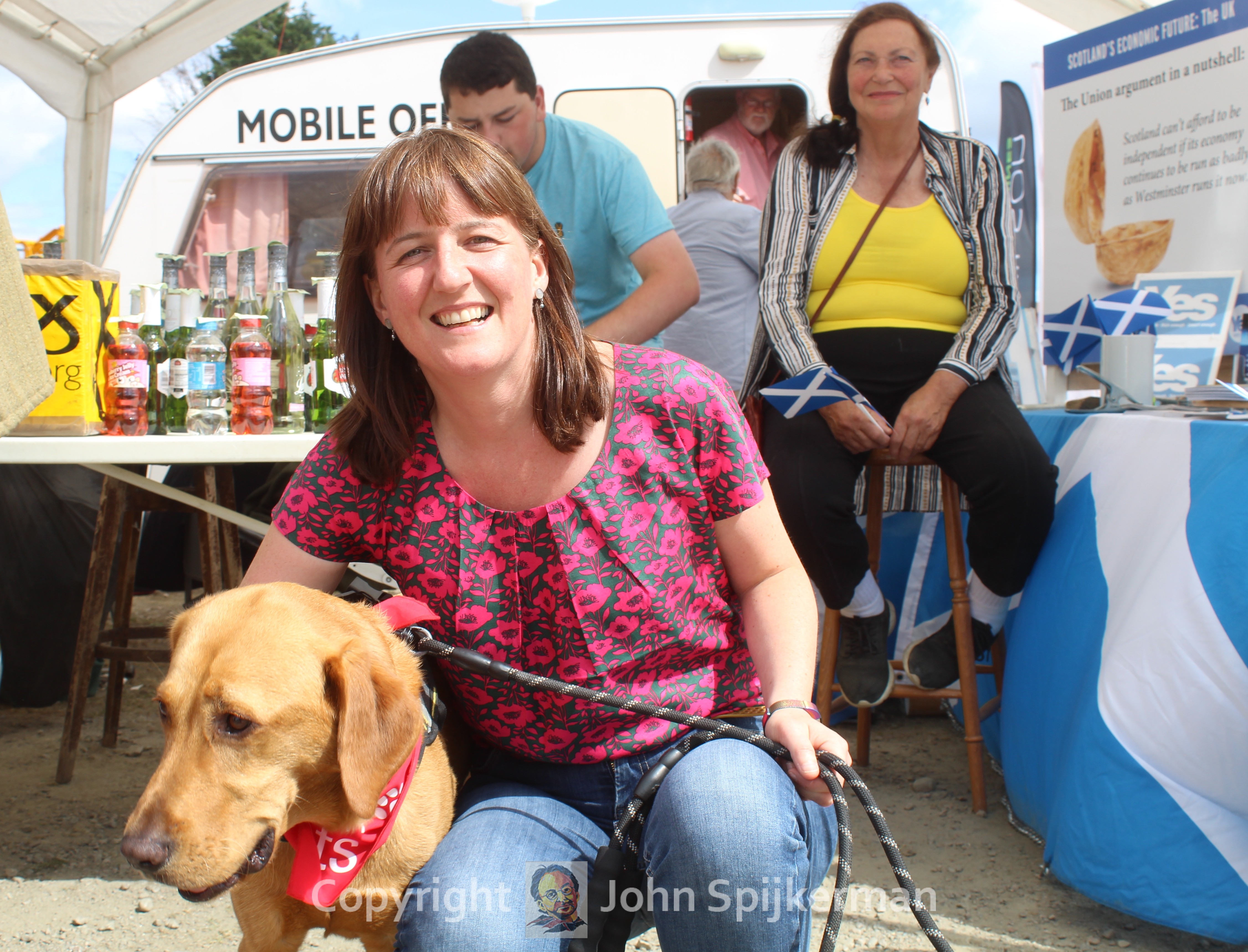 MUIR OF ORD – ,,I find it hard to believe that there won’t be another independence referendum’’, says government minister Maree Todd. In 2016 she became minister for children and young people. She’s also a Member of the Scottish Parliament (MSP) for the Highlands and Islands region. At the Black Isle Show in Muir of Ord she talked about Brexit and a second independence referendum for Scotland. ,,But we’ll first have to see how Brexit evolves. What deal is struck and what arrangement is made.’’

The first Scottish Independence referendum was held in 2014. It was the trigger in Maree Todds own political awareness. She worked as a pharmacist in a psychiatric hospital and became politically aware as independence loomed. The choice for the Scottish National Party (SNP) was a natural one for her. ,,I voted for them all my life.’’ As a politician she made a ‘meteoric rise’.  She seems to be a very down to earth, accessible character and not a career politician. ,,I’m very connected to the people in this area. They keep me grounded.’’

Scottish independence is important to Todd. ,,Independence is normal. It is unusual that countries don’t get what they vote for,’’ she claims. She is confident that Scotland can survive as an independent nation. ,,We have agriculture and fishing. We have some of the most beautiful, stunning landscapes and geography. Tourism is booming and we have massive renewal energy potential: wind, tidal and wave energy. And of course there’s oil, too. Countries like New Zealand are on the opposite of the world. They are very far away from people that they trade with and yet they do great. We’re within Europe. We can easily trade with all of our neighbours. Why wouldn’t we do well?’’ 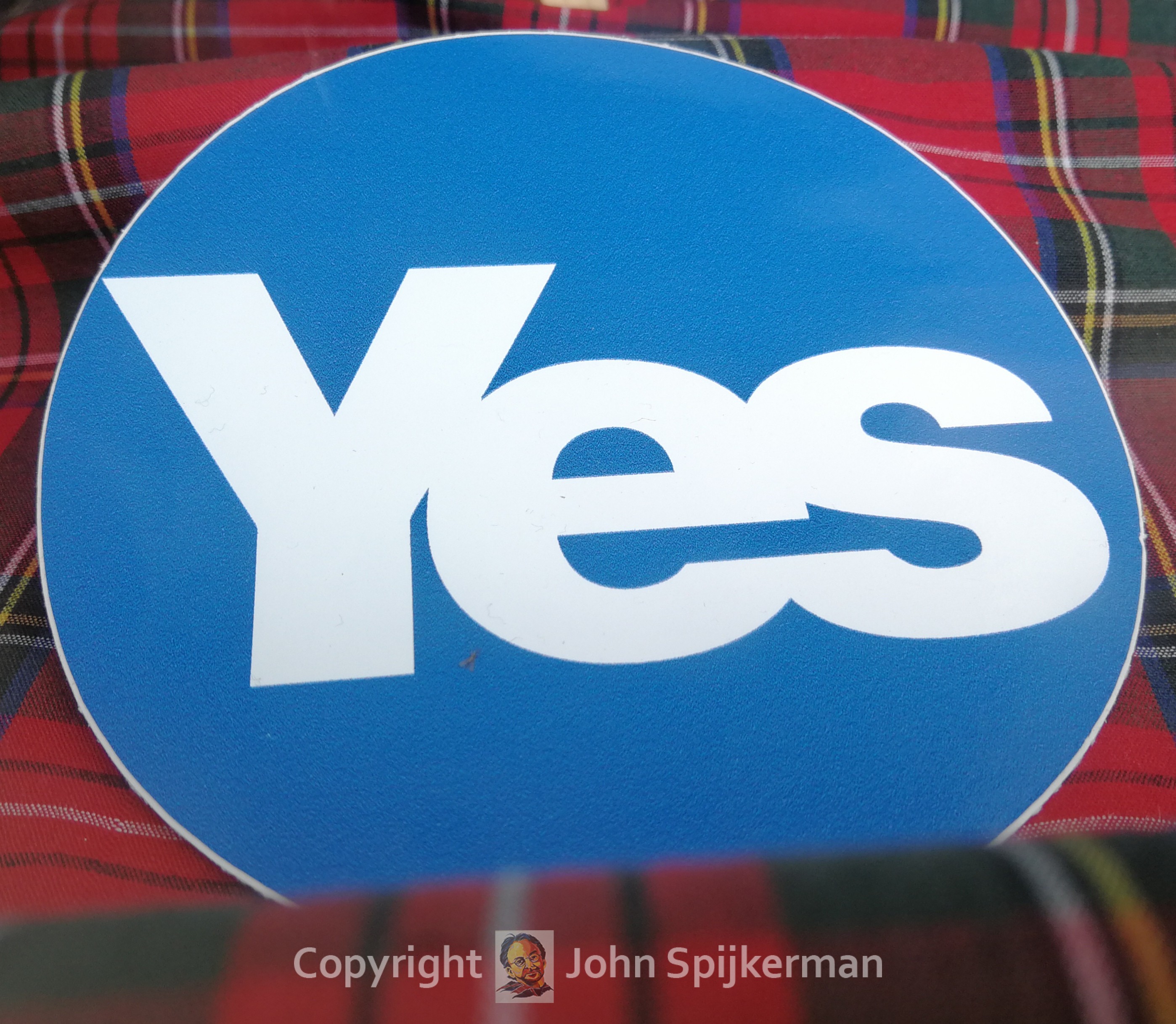 Within the United Kingdom the voice of Scotland is not heard, the minister states. ,,This Brexit is happening without any reference to how Scotland voted. It’s happening against our will. We have a Tory government which brings in welfare reform that is leading to real destitution among our people, to a big sharp rise in foodbanks. And we didn’t vote for that, nor did we vote for Brexit. With the independence referendum we were told that if we voted ’No’, we would stay in the EU and now the very opposite is happening.

Todd finds it hard to believe that there won’t be another Independence Referendum. ,,It just seems so undemocratic. But at the moment there is such turmoil associated with Brexit. We need to know with Brexit which way it is going before we can decide about independence. Do we manage to retain our single market membership? Do we manage to stay in the customs union? We’re starting to lose hope on that in Scotland.’’

Todd feels that the accessibility of Scottish politicians on the whole and members of the government  in particular is the reason Scottish people didn’t vote for Brexit. More than 62 percent voted to remain within the EU. ,,The people who voted for Brexit felt disconnected from government and disenfranchised. That’s why they did it. To punish the elites and the folks in power. That’s why it didn’t happen in Scotland, because people still feel a connection to their government. Our European membership is very important to us. It is very important in the Highlands and Islands.’’ She adds. ,,And now we have to go because our big brother, our big next door neighbour, voted to go. The Scottish government is very keen for the rest of the world to understand the situation that Scotland is in. We want people to understand that we’re not happy with Brexit and that a different view has been taken by the people of Scotland.’’

The minister stresses the fact that the Scottish National Party was elected in 2016 on a manifesto that said if there was a ‘material change’ there would be another independence referendum. ,,Now Brexit surely is a material change.’’ Another ‘material change’, according to Todd, is the expected supreme court ruling on the powers of the Scottish parliament after Brexit. Todd thinks Westminster is engaged in an ‘attack on devolution’. ,,We were promised during the first independence referendum that we would have the most powerful, devolved parliament in the world in Scotland. At the moment we have the supreme court case going on where the UK government is trying to overturn a Scottish parliament decision. A decision made by the democratically elected representatives in Scotland.’’ Todd feels that Westminster wants to curtail the powers of the Scottish Parliament around Brexit legislation. ,,The Scotland Act clearly says that if it is not stated that it is reserved to Westminster, it is devolved. Fishing and farming were devolved. Scotland has a different set up from Engeland.  Our fishing is hugely important to Scotland. In both those areas the power is coming back from Europe. As we leave they are trying to take the powers to Westminster and not to Scotland.’’ The relationship between Westminster and Edinburgh has never been worse, Todd describes. ,,There is a real tussle going on. Our suspicion is that they want to form trade deals that woud undermine the position of Scotland. That we might end up with cheap, low quality meat.’’ 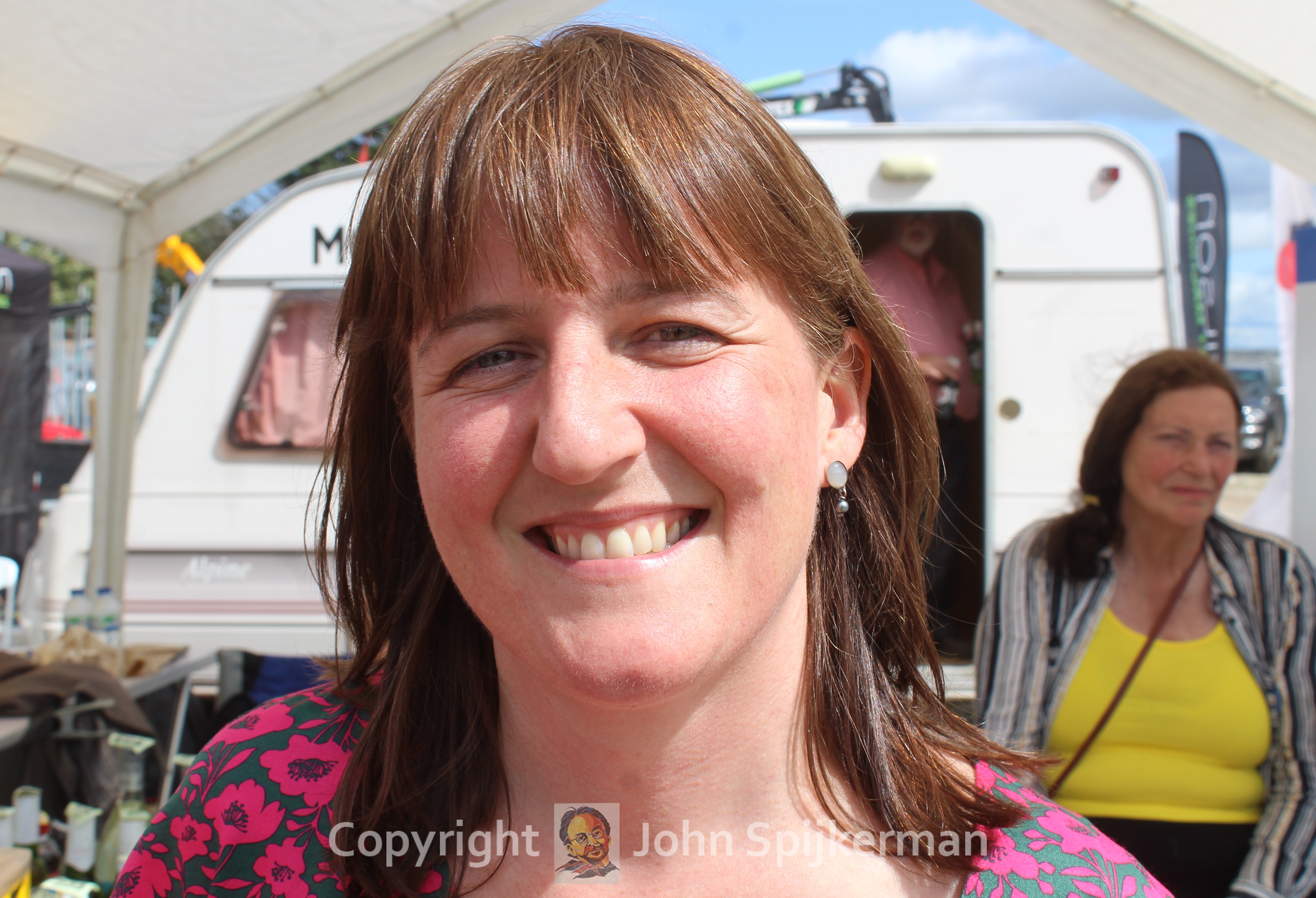 Maree Todd feels that the momentum for independence is growing. ,,Brexit was a gamechanger for a lot of people. We had a march for independence in Inverness and it was huge. Normally people from the Highlands and Islands are quite reserved and it is quite astonishing to see them take to the streets in those numbers. In 2016 when I came in as a MSP we didn’t imagine there would be another independence referendum. Now everybody’s asking ‘When is it going to be’? That shows you there’s some momentum…’’ Todd warns Westminster that politically it would be very harmful if it wouldn’t allow another independence referendum.  ,,That wouldn’t go well down very well politically. Some things are legally okay, but politically not.’’ Especially not within a climate where Scotland doesn’t feel democratically represented and feels Westminster is trying to overrule decisions that are made by democratically elected representatives in Scotland, Todd explains.

Although Scotland made it perfectly clear that it wanted to stay within the European Union, it will have to leave. ,,Its inevitable that we’ll come out of the EU. There’s no way of stopping it. I don’t think there’s time to hold an independence referendum before march next year. She expects the relationship between the UK and Europe will be much clearer within six months. ,,Depending on which arrangements are made, decisions can be made about an independent Scotland. There’s constitutional crisis all over the UK, not only in Scotland’’, Todd observes. ,,There are so many unknowns and uncertainties. What if Ireland reunifies. That border problem is not solvable. What is going to happen there and what effect will that have on the constitutional questions in Scotland?’’

In terms of nationalism the SNP is very much about democracy, Todd argues. ,,It’s a very civic nationalism, not so much about ethnicity. We believe that anyone who lives in Scotland, is Scottish. There has been a lot of migration from Scotland to other parts of the world and we are very open to people coming here.’’ The SNP wants to relax immigration. ,,Our population hasn’t grown too much during the last one hundred years. We need immigrants. We value the contribution they make to our economy. Small businesses need more people to grow. Our lack of young working people and population, is limiting our ability to grow.’’ As an example, she mentions the situation in Barra on the Hebrides where there are too few people that work in the fishing industries. ,,People from the Philippines came, but the laws changed and they can no longer get visas for them for fishing in insular water.’’ As a result boats are tied up or sold and jobs lost in the fish processing industry. ,,We’re pro-immigration. We’re facing a demographic challenge. We really do need young people.’’

She thoroughly enjoys her work as a minister. ,,It’s an incredible opportunity to make a lasting difference.’’ One of the toughest things of being a politician, she finds, is having to be away from home. ,,Having to be in Edinburgh. It’s hard to be away from your family, your community.’’ 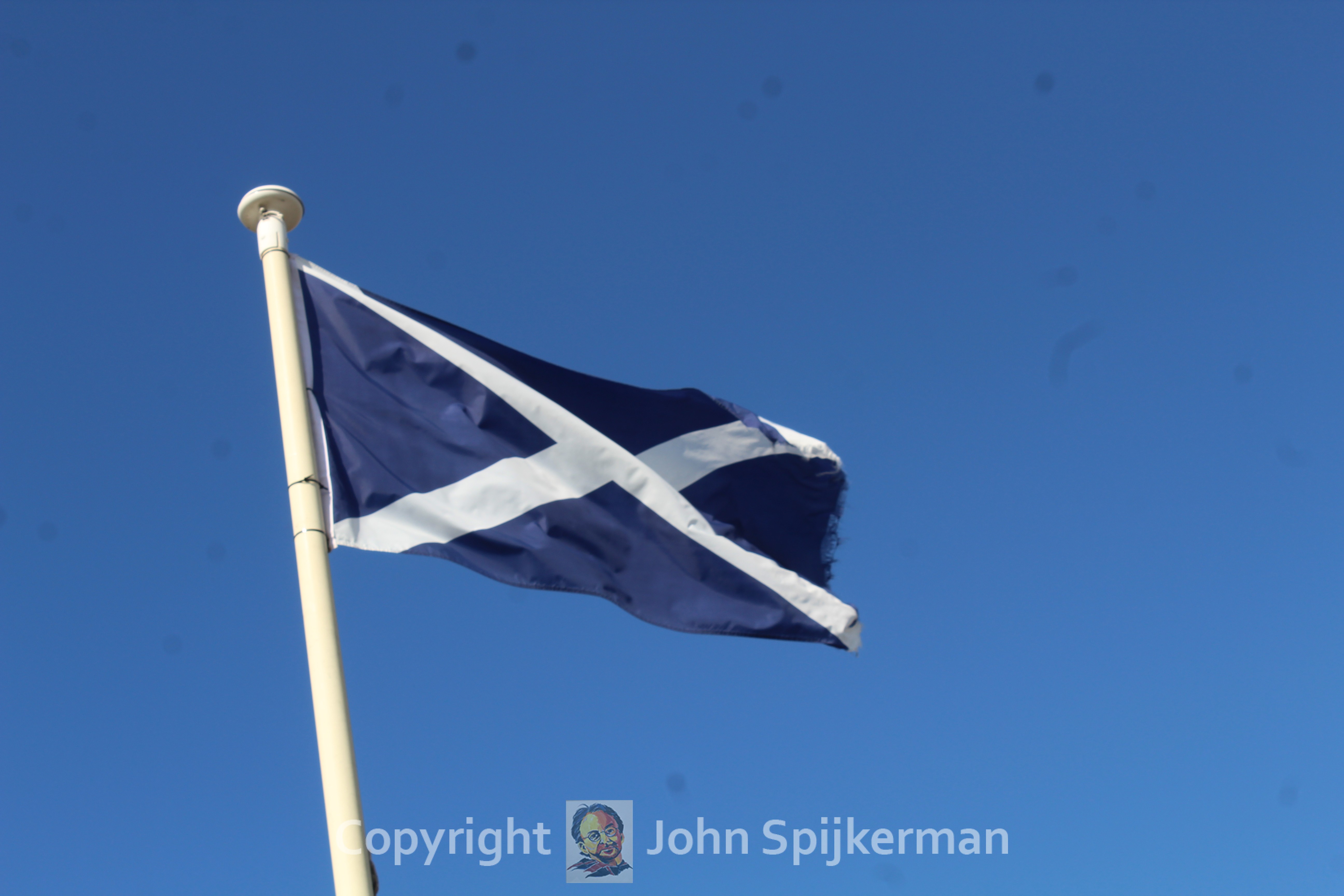 What does she want to achieve? ,,It was independence that brought me into politics. I believe that we need independence for this country to flourish. We have so many assets and yet we’re not fully realising our potential. The people in Scotland – and particularly in the Highlands and Islands – don’t feel like we’re rich. But we have incredible potential. I want us to harness that and to benefit the people living here.’’